Having .NET Applications working with SQL Server, some unforeseen timeout errors can be raised for two possible causes: bad-written SQL code (especially Ad-Hoc queries) and application issues. Under this circumstance, developers will generally blame SQL Server at first glance because they may think it is a misconfiguration related to timeout in SQL Server. In my experience troubleshooting these issues, I would say that lots of them are not mostly related to SQL Server configuration itself. Additionally, when it comes to application as the root cause, reading the SQL Server error log, you will not find any error about timeout or failed login events. What does it mean? it simply means that the application never tried to connect to SQL Server because it was still working at application level when the error was raised. Thus, the cause of timeout error is inside the application at Net SqlClient Data Provider level (see the CommandTimeout property value configured for the application connection). This 'CommandTimeout' property specifies the number of seconds that a application provider should wait for result sets before sending a timeout signal. It is well known that the default is 30 seconds, therefore, it may not be good enough due to application performance problems.

In order to get it fixed, firstly, developers should check .NET code within applications. In some cases, the developers I worked with found infinite loops or slow codes which spent much time before sending SQL queries to the database engine, as a result of this, the timeout threshold was reached at application level and, obviously, the error was raised. By the way, the following error could also be related to timeout:

Having checked the application, you can increase the 'CommandTimeout' property value to 60 seconds (if it is not enough then change to 120 or 180, and also considerate using 0 (unlimited) which should be a workaround while the problem is being traced and fixed). That is all for now, let me know any remarks you may have. Thanks for reading. Stay tuned.
Posted by Percy Reyes at August 04, 2017 No comments:

After installing a SQL instance, we may need to test the database connectivity from a client host to make sure that everything is working very well, for instance, sometimes Windows Firewall might block access to the service or there might be network issues. Moreover, in the likely event that there was no time to install SQL Server client tools such as SSMS or SQLCMD to carry out the test, you woud be a bit suprised to know that there is a simpler way to do it, that is via a Data Link file. Consequently, in this post I am going to show you how to create and use a Data Link file to test connectivity to a SQL instance. To begin with, you must open Notepad to create an empty .txt file and save it with the .udl extension as you can see in the following picture.

After doing that, you must open the .udl file and you will then see the following window with four tabs. The second tab "Connection" is to fill with the server name (or SQL instance name) and the credentials accordingly. For instance, I am testing the connectivity to a default SQL instance and using Windows Authentication. You must modify that to serve your needs. 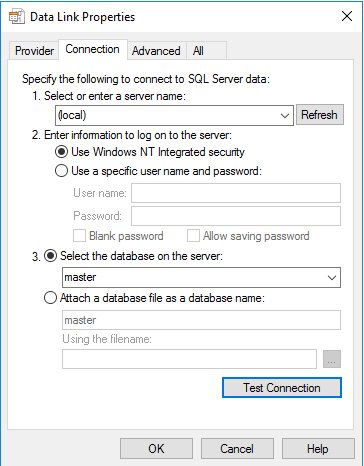 In the first tab "Provider" we can choose the Provider to use in the test. By default, it is always "Microsoft OLE DB Provider for SQL Server". It is ideal to test other providers as well. It is worth noting that SQL Native Providers will be listed if SQL Client tools are installed locally in the client host from where the test is done. In the tab "Advanced" it is possible to set the timeout value whereas in the tab "All" we can see a summary of all the settings, and we can also edit the values of some important connection parameters such as "Language", "Connect Timeout", "Packet Size", "Data Source" and "Initial Catalog". 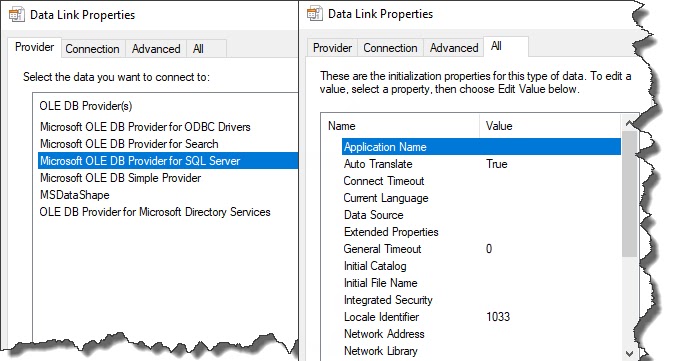 Finally, we just have to click on "Test Connection" in the tab "Connection" to proceed with the test. If the connectivity to the SQL instance is ok, you will see the message "Test connection succeeded", it couldn't have been simpler! 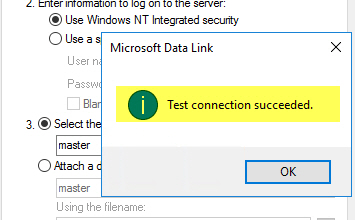 That is all for now. I hope you find this post helpful and practical. Let me know any remarks you ma have. Stay tuned.
Posted by Percy Reyes at July 25, 2017 No comments:


Furthermore, we can also capture the showplan XML for query compile, but doing that has significant performance overhead because it is captured for each compilation or recompilation. So, just do it for a very short time as long as you see a high value for the SQL Compilations/sec counter in Performance Monitor. Once you know where the problem is you can use Engine Tuning Advisor to see whether any indexing changes improve the compile time and the execution time of the query.
Talking of DMVs to diagnose recompilation issues, looking into 'sys.dm_exec_query_optimizer_info' is very helpful, in particular, look at the Elapsed Time, which is the time elapsed due to optimizations, and also Final Cost. If you see that Time Elapsed is very close to the CPU time, you might reach the conclusion that the compilation and recompilation time is attributable to that high CPU use. Another DMV to use is 'sys.dm_exec_query_stats' whose most important columns to look at are sql_handle, total worker time, plan generation number (the number of times the query has recompiled), and statement Start Offset. Here is an example to check the top 20 most procedures that have been recompiled.


There is a plethora of recommendations to deal with recompilation and keep the performance in optimum conditions, but for now you can take into consideration the following options:
That is all for now, let me know any remarks you may have.
Posted by Percy Reyes at July 20, 2017 2 comments:

Naturally, I have been asked many times about ports used by SQL Server services and to be honest sometimes I took me some time to reply because there is a great number of ports and protocols and it is not easy to remember them quickly. Not all of us have to learn everything by rote, so thinking about it, I made the decision of sharing the following lists of useful ports and protocols so that you can have them at hand when needed.


That is all for now. I hope you find this post useful. Let me know any remarks you may have. Stay tuned.
Posted by Percy Reyes at July 14, 2017 No comments:

Regardless of the method that is used to take SQL Server backups, they need to be carefully monitored 24x7 hours especially in critical database environments whose data is changing rapidly. Keeping the backups up to date is crucial as they can save us a lot of time when it comes to recovering databases in the likely event of unwitting incidents. On the top of that, in my experience it was shameful to see many environments without a backup strategy in place, even more, nobody was in charge of them.  In that context, it is clear that those businesses were surely at high risk of losing a lot of data and jaw-dropping amounts of money. Sometimes it is believed that having backups of the whole virtual machine is good enough, nevertheless, this sort of backup has a different purpose from a database backup. Thus, at no time can we replace SQL Server database backups with virtual machine backups which are time-consuming, inadequate, far-fetched for databases. In this sense, having implemented a suitable database backup strategy (Full + Diff + Log Backups) and carefully monitoring them are fundamental tasks to serve the needs of ensuring the recovery database process.
Broadly, it is of paramount importance to have a script at hand to find out whether or not specific sorts of backups were taken properly as well as how long they last, the size of the backup file, who took the backup, or if the backup was taken using CHECK_SUM option, etc. Today I am sharing that script which returns important information of backups for all databases in a SQL Server instance. In the following script, it filters out info of Full Backups (type='D'). You can use 'L' for Log Backup and 'I' for Differential Backup. So, try it out and make the most out of the info.


That is all for now, let me know any remarks you may have.
Posted by Percy Reyes at July 03, 2017 No comments: