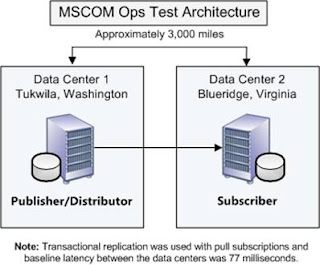 Furthermore, scalability and performance have been improved in SQL Server 2008 Native Client, exactly, in the way of invoking stored procedures with ODBC call syntax and OLE DB remote procedure call (RPC) syntax. To find out more details about it, check out Geo-Replication Performance Gains with Microsoft SQL Server 2008 Running on Windows Server 2008. It is also found best practices and baselines, here are some of the them:


To sum up, there are significant gains in terms of performance, scalability and disaster recovery implemented in SQL Server 2008 on Windows Server 2008. Not only will it be much faster than SQL Server 2005 on Windows Server 2003, but also much secure and cheaper. Therefore, SQL Server Replication technology will be considered a stronger solution inclusive for high availability purposes.
I hope you enjoy reading both document as they are a good read. That is all for now, let me know any remark you may have. Thanks for reading.
Posted by Percy Reyes at May 05, 2010

Let me know any remarks or questions you may have.